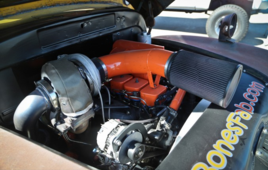 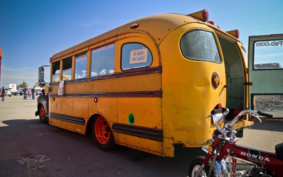 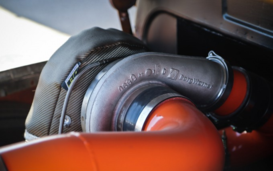 ​Under the patina-covered school with a Wayne body sits a fully reworked chassis that uses 1980s Chevy C30 components up front, custom rear suspension, and RideTech air bags all around. This not only allows the bus to be dropped to the ground, the setup makes it drive like a much more modern vehicle.

Beneath the hood sits a 5.9-liter Cummins 12-valve diesel with a compound turbo arrangement which was custom built at BonesFab.  A 78mm BorgWarner turbocharger sitting on top of a 62mm turbo. The gearbox is a New Venture 4500 5-speed manual and the rear differential is a beefy Dana 70.

This setup is good for about five or six hundred horsepower, and while there’s still a lot of weight to move around, the Cummins gets the old bus down the road with surprising thrust.

And as crazy as this old bus looks when it’s standing still, imagine what it looks like passing cars at 75 miles per hour going up the Grapevine – which it does with ease while getting 13 mpg. 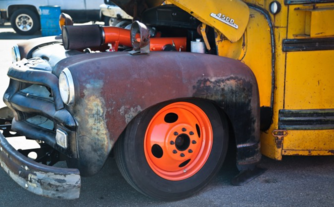 Upon buying this 54 school bus, Bones knew he was in for a long journey until it was ready to be driven and showed. Nonetheless, he was ready and determined to make this a definite head turner.. Boy did he succeed!